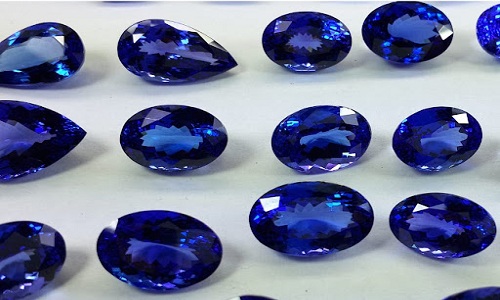 If rarity is a factor in determining a gemstone’s worth, Tanzanite, which is mined from a single location, may be prized only for that reason. Tanzanite is mined in a small area near Mount Kilimanjaro in Tanzania that covers only 8 square miles. Diamonds, on the other hand, are found in over 30 nations across different continents and are considered uncommon.

Tanzanite, known for its bright blue-violet color, owes its popularity to not just its recent discovery, but also to a sophisticated public relations campaign. Tanzanite is a variety of the species zoisite, which is split into species and varieties in gemology. It is classified as a gemstone since it has a unique chemical makeup, is inorganic, and is natural. Calcium, aluminum, silica oxide, and hydroxide make up tanzanite’s makeup. It’s a calcium aluminum hydroxy silicate, to put it another way. The beauty and rarity of Tanzanite make it a valuable gemstone. A gemstone’s most prized feature is that it can’t be found everywhere on the planet.

Tanzanite has a Mohs hardness of 6 to 7, making it less scratch-resistant than diamonds (10), rubies and sapphires (9), and even quartz (7). Tanzanite is one of the more delicate gemstones due to its softer nature and fair-to-poor hardness level. It’s also vulnerable to thermal stress and rapid temperature changes.

Although the gem has been there for hundreds of millions of years, it was only discovered in 1967. According to legend, tanzanite was discovered by a Masai tribesman (the Masai are an ethnic group who live in northern, central, and southern Kenya and northern Tanzania) who first noticed the bright blue crystals and contacted Manuel de Souza, an Indian tailor, and prospector, or by de Souza himself. In any case, de Souza staked a mining claim in the region, hoping that the vivid deposit contained sapphire. Although zoisite, of which tanzanite is a variation, was known at the time, it was normally translucent, opaque, green, and utilized in jewelry carving.

The blue gemstone was first introduced to the globe by Harry Platt, former chairman of Tiffany & Co. When Platt saw it while visiting a lapidary in Europe, he not only won the rights to sell it, but he also got to name it after the country where it was unearthed. The Mount Kilimanjaro source near Arusha, Tanzania, is still the only spot on the planet where the gem can be found, more than five decades later.

Tanzanite is prized for its sapphire-like color of pure blue or blue-violet. Colored stones are, after all, sold for their beauty. The better stones will have a deeper color and weigh at least 5 carats. The better the value, the bigger the stone is and the more brilliant the color is.

Surprisingly, when Tanzanite is mined, it does not retain its vivid hue. Heat treatment is used to obtain the blue color in as much as 95% of the gems extracted. The majority of Tanzanite is brownish when it is mined. Tanzanite’s color is stable once heated to a dazzling blue, so buyers need not be concerned about it fading. The color of tanzanite can trend toward a gray or purple hue depending on how it is cut, which might reduce its value. Thulite (pink) and anyolite (red/ruby) are two more zoisite variants, although it can also appear in greenish or yellow hues.

It’s difficult to pick a winner between a diamond and a Tanzanite stone. This is because, despite their shared ground, the two stones are worlds apart. The gemstone hierarchy places diamonds at the top, with Tanzanite somewhere in the middle. It’s not only less durable than a diamond or lacks the brightness, sparkle, and clarity of a diamond; it’s the combination of all of these factors. Despite the fact that Tanzanite is rarer than both diamonds and sapphire, it sells for a lesser price. One cause could be the difference in durability: Tanzanite is only “fairly durable,” but sapphires are only second to diamonds in terms of durability.

Tanzanite, like many other gems, has no special industrial utility, but it is often used in jewelry. There aren’t many blue stones, especially ones with such a vivid color, and tanzanite doesn’t have a synthetic equivalent. They are used as Tanzanite jewelry.

Gemstones are thought to have medicinal or spiritual properties by some individuals. Ancient peoples had certain beliefs and applications for them, without a doubt. However, because Tanzanite was just discovered recently, we are unable to dive into its past. Nowadays Tanzanite is bejeweled into various ornaments, pendants, Tanzanite rings, bracelets,s, etc. Some of them are listed below. 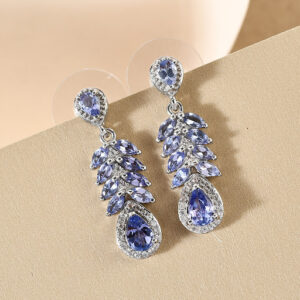 These dangling tanzanite and zircon earrings are a tremendous delight as the spring season approaches when new, vivid hues are in fashion. These tanzanite earrings have a seamless design and are used to connect two pear-shaped Tanzanite gemstones. The zircons interspersed throughout the jewelry offer a dazzling effect on the overall appearance. 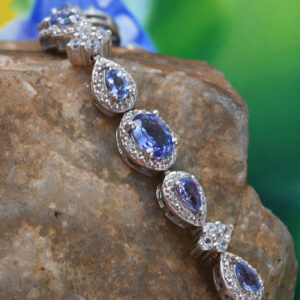 This bracelet is a combination of quality and design that is sure to impress. The station bracelet adds a special touch to your outfits, making them stand out when worn for a party. This bracelet is a true testament to the class that experienced designers possess, as it is designed with the beauty of superior Tanzanite and zircons.