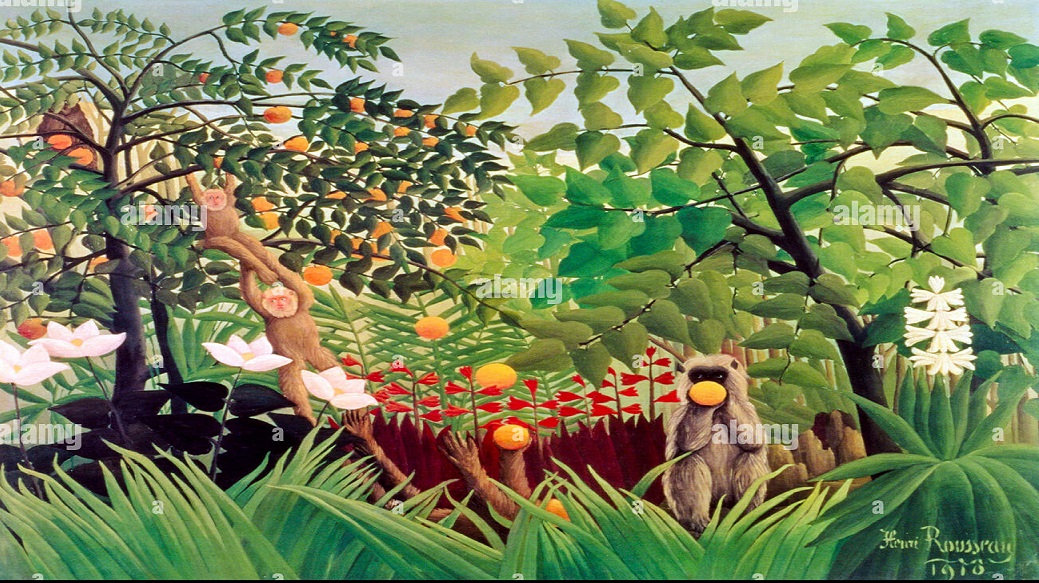 The world-famous painter Henri Rousseau (1844-1910) was self-taught and had a concise artistic career. However, in this relatively short period, he created, apart from other paintings, more than 25 so-called “jungle paintings.” Animals are depicted in most of his jungle paintings, and his style influenced many young artists at the end of the 20th century and the beginning of the 21st century.

In this article, we’ll briefly tell you more about the painter Henri Rousseau’s life and then discuss some of his paintings where animals are included in the composition.

The world-famous painter Henri Rousseau was born in Laval in France, where his father was the local tinsmith. Henri frequently worked with him as a small boy. At school, Henri was mediocre in most of his high school subjects but won many prizes for drawing and music.

After he had completed high school, he started to study law while he was working as a lawyer. However, he didn’t complete his studies and joined the army in 1863 for four years. He later moved to Paris to support his widowed mother after his father died in 1868.

He married his landlord’s daughter in 1868 and had nine children over the years, of which only one survived. The others, unfortunately, died of tuberculosis. He was in government service then, and in 1871, he was appointed the Collector of Taxes on goods entering Paris. In 1888, his wife died, and ten years later, he married Josephine Noury.

He only started painting seriously when he was in his early forties. Then, in the early 1890s, he retired as the Collector of Taxes to enable him to work only on his art. In August 1910, he was admitted to the Necker Hospital in Paris with gangrene in his leg, and after an operation, he died from a blood clot on 2 September 1910.

All about Henri Rousseau’s Art Career 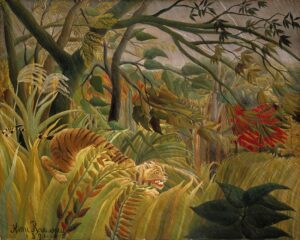 Rousseau didn’t receive any formal training as a painter. However, he admitted that he had received “advice” from two established Academic painters, Felix Auguste-Clement and Jean-Leon Gerome. Nevertheless, Rousseau always claimed that, in principle, he only had nature as his teacher.

Because he was mainly self-taught, art historians refer to him as a naive or primitive painter. Although he has become famous because he depicted jungle scenes and wild animals, he never left France or saw a jungle. Instead, he found inspiration in illustrated books and botanical gardens in Paris. He also studied “taxidermied jungle animals.”

His first exhibition was in the “Salon des Independents” in 1886. The Henri Rousseau paintings were not placed prominently, but in 1891, Rousseau received his first positive review. It was for his animal painting, “Surprised! Tiger in a Tropical Storm.”

In 1893, he moved to Montparnasse, where he lived and worked until he died in 1910. During this time, one of his most famous paintings, “The Sleeping Gypsy,” was created, and in 1905 the “Hungry Lion Throws Itself on the Antelope” was exhibited with young avant-garde artists such as Henri Matisse. He also started to receive commissions, and in 1907, the artist Robert Delaunay’s mother commissioned him to paint “The Snake Charmer.”

It depicts Rousseau’s mistress lying naked on a divan. She is looking at a landscape of lush jungle foliage with flowers and animals. Birds, a lion and lioness, a monkey, a snake, and an elephant are all depicted in the scene. The scene shows the nude’s left arm reaching towards the lions and a black snake charmer. The snake charmer is playing his flute and is facing the viewer. The pink-bellied snake slithers through the plants and reflects the woman’s curves on the divan.

Because Rousseau suspected viewers would probably not understand the painting, he wrote a poem to accompany the painting. The poem tells the story of the young lady who has fallen asleep, and in her dream, she hears the snake charmer’s music and sees that all the flowers, animals, and even the snake, are listening to the joyous tunes of the charmer’s reed instrument.

Style-wise the painting is a mixture of the typical reclining nude of classicism with modern folk art. His style also shows the multiple perspectives of Cubism combined with the imagery of Surrealism.

Some of the other Henri Rousseau Paintings with Animals

“The Hungry Lion Throws Itself on the Antelope” was painted in 1905. It depicts a hungry lion chowing down on the neck of a helpless antelope. Birds of prey and a panther are depicted as onlookers. The painting is based on the poses of the two animals on a diorama in a zoological garden in France.”

“The Sleeping Gypsy” was painted in 1897, portraying a woman asleep in a desert with a huge lion standing over her. The lion seemed transfixed. The painting is very expressive. Opposing feelings of peace and danger are united in the woman’s smile, the lion’s staring eye, and the twist at the end of the lion’s tail.

Other animal paintings by Henri Rousseau include “Apes in the Orange Grove,” “Tropical Forest with Apes and Snake,” “Exotic Landscape,” “The Tropics,” and “Attacked by a Tiger.”

What is impressive about Henri Rousseau is that although he had an absolute passion for painting jungle scenes and wild animals, he never was in a jungle or saw any animal in the wild. Instead, he based his paintings on what he had seen in books and botanical gardens. And despite this, he depicted all the wild animals and birds in his paintings wonderfully and uniquely.